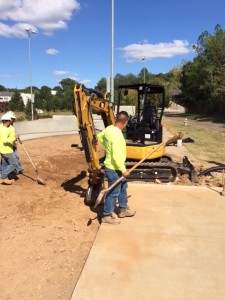 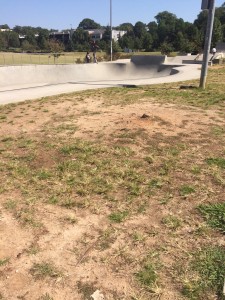 Turnkey Construction and Roofing is currently working on an exciting project for the Atlanta Parks and Recreation Department at the Historic Fourth Ward Skate Park (HFWSP). The HFWSP is Atlanta’s first public skatepark, originally constructed in 2011, and has become such a popular attraction within the Atlanta skateboarding community that an enlargement has become a necessity.

Turnkey Construction and Roofing is providing services to remove landscaping and infill concrete to enlarge the existing Skate Park and accommodate the facility’s increasing popularity.

Included in the scope of work is the excavation and removal of landscape, tree stumps and grass to install a 4 inch stone base of concrete. The excavated dirt and soil will be filled into low areas of the site near the BeltLine path. Several drains are also being installed into the existing storm water system to allow for drainage of water off the concrete. 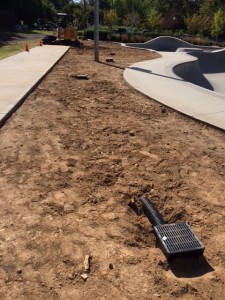 The HFWSP, predominantly funded through the Atlanta BeltLine Inc. (ABI), the entity overseeing the planning and execution of the Atlanta BeltLine vision, was also partially funded by the Tony Hawk Foundation. Hawk took interest in the original project due to its extraordinary size and design, which allows for skaters of every skill level to enjoy the park. The local Atlanta skateboard community was highly involved in the design process which contributed to this exceptional facility. In addition to world-class skateboard amenities, the park also includes a playground and multi-use athletic field.

About Turnkey Construction and Roofing
Established in 2010, Turnkey Construction & Roofing (Turnkey) is a woman-owned business headquartered in Atlanta, Georgia. Our team’s more than 50 years of combined experience in commercial and residential construction gives us the knowledge and expertise to handle any project, no matter the size or complexity. Turnkey offers an array of commercial construction services including interior office and office warehouse fit-outs, maintenance, disaster recovery work, and roofing systems, with a special focus on industrial flat roofs. To learn more about Turnkey and our expertise in the commercial construction and roofing industry, go to www.turnkeyga.com.

About Atlanta BeltLine Inc.
Atlanta BeltLine, Inc. was formed in 2006 by Invest Atlanta (formerly the Atlanta Development Authority) for the purpose of managing the implementation of the Atlanta BeltLine program. ABI works closely with City of Atlanta departments to define details of the plan, secure public funding, inform and engage members of the community, and serve as the overall project management office for construction of the trails, transit, parks, and other key components.